Touching Story: If you can survive, you must remember that I love you

I read this very touching story just today on facebook. If you happen to read this blog please share it with your friends. Mother’s love is truly incomparable and it is proven in many circumstances.

This featured story is just another demonstration of a mother’s love. Please read on…

This is a true story of a Mother’s Sacrifice during the Japan Earthquake.

After the Earthquake had subsided, when the rescuers reached the ruins of a young woman’s house, they saw her dead body through the cracks. But her pose was somehow strange that she knelt on her knees like a person was worshiping; her body was leaning forward, and her two hands were supporting by an object. The collapsed house had crashed her back and her head. 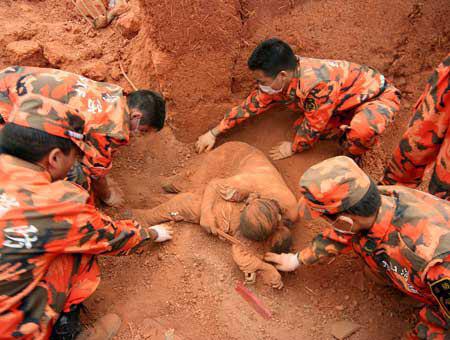 With so many difficulties, the leader of the rescuer team put his hand through a narrow gap on the wall to reach the woman’s body. He was hoping that this woman could be still alive. However, the cold and stiff body told him that she had passed away for sure.

He and the rest of the team left this house and were going to search the next collapsed building. For some reason, the team leader was driven by a compelling force to go back to the ruined house of the dead woman. Again, he knelt down and used his had through the narrow cracks to search the little space under the dead body. Suddenly, he screamed with excitement, “A child! There is a child!”

The whole team worked together; carefully they removed the piles of ruined objects around the dead woman. There was a 3 months old little boy wrapped in a flowery blanket under his mother’s dead body.

Obviously, the woman had made an ultimate sacrifice for saving her son. When her house was falling, she used her body to make a cover to protect her son. The little boy was still sleeping peacefully when the team leader picked him up.

The medical doctor came quickly to exam the little boy. After he opened the blanket, he saw a cell phone inside the blanket. There was a text message on the screen. It said, “If you can survive, you must remember that I love you.”

Read: 21 MEMOs from a Child for Parents

This cell phone was passing around from one hand to another. Everybody that read the message wept. “If you can survive, you must remember that I love you.” Such is the mother’s love for her child!!