(Touching Video) Homeless Guys Arm Wrestle for Money, What Happens Next is Heartwarming

The people behind modelfrankstertv, Kobe and Justin decided to create a video where they will feature two homeless people (Aaron and Robert) from the vicinity of New York City to do arm wrestling.

The mechanics of the game is whoever wins the match will receive $100, the loser, however, won’t win anything. 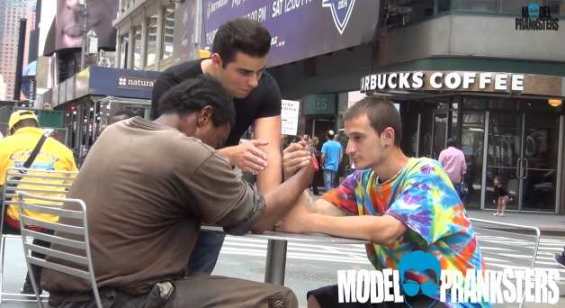 What they didn’t tell the participants is they plan to give $50 to whoever the loser is, as a consolation prize. It turns out Justin and Kobe were the ones who got surprised by the reaction of the winner. In the end, Kobe decided to give them both an additional $100 each.

Watch the video below

“Feed the needy, not the greedy” – Aaron of New York City

Update:
As of March 2020, the viral video has received roughly 28 Million views, over 430 thousand likes, and 26 thousand dislikes.

Previous post: The Voice Kids Ph Grand Champion: Darren, Lyca, Darlene or Juan Karlos, Who will it be?