Traffic Enforcer that Sells Kakanin in EDSA to be Promoted

Watch the full story from 24Oras. The traffic enforcer that sells kakanin or Filipino delicacies in EDSA during his day-off on weekends will receive a promotion. The enforcer’s photos and videos are currently viral in social media. This is after the viral photo has reached the radar of Metro Manila Development Authority chairman.

In the news report, MMDA Chairman Francisco Tolentino summons in his office the Traffic Enforcer Fernando Gonzalez not to punish but to promote the officer.

Based on the video Fernando Gonzalez seemed anxious and shaking while in front of the chairman. He probably thought that he will be relieved from his work but to his surprise, he received a promotion.

According to Fernando Gonzalez, he is working part-time selling ‘kakanin’ (native delicacies) during off-day to support his son’s education. He has two sons; one is already first-year in college, and the other is in high school.

He wears his field uniform during the act so he is also prepared whenever there is a shortage of traffic enforcers in his location. His superior commended because he diligently does his work.

Traffic Enforcer Fernando Gonzalez, 51-year-old, has been an employee of Metro Manila Development Authority (MMDA)for 20 years. During the tenure, his record has no stain of whatsoever illegal deeds. He does not want to do illegal work like ‘pangongotong’ because he wants his family to be proud of him. 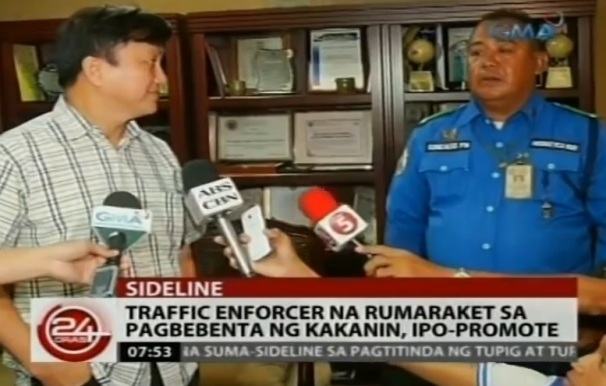 He graduated with a degree in Bachelor of Science in Criminology. Currently, he is receiving P15000 monthly salary as an enforcer. Aside from delicacies, their family is planning to sell rags in the coming months.

In social media, Sir Fernando has earned numerous positive remarks and respect from the netizens. Some told that his story is very inspiring and touching. There is no shame in selling kakanin because it is legal as compared to those traffic enforcers who resort to ‘pangongotong,’ some added.

Next post: Toys R Us Big Toy Sale in the Philippines