Who is the current leader when comes to TV ratings between the three major network in the Philippines? Is it ABS-CBN or is it still GMA7? Or maybe TV5 is catching up and slowly gaining popularity? Let us find out their current standing for the first quarter of 2014.

According to SONA by Jessica Soho episode published on May 5,2014 in youtube, GMA7 is still the leader when comes TV audience ratings in Mega Manila and Urban Luzon based on AGB Nielsen TV Audience Measurement survey. 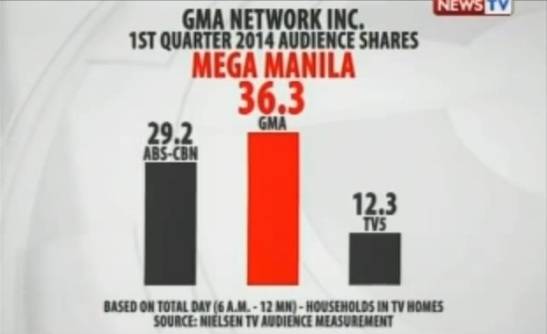 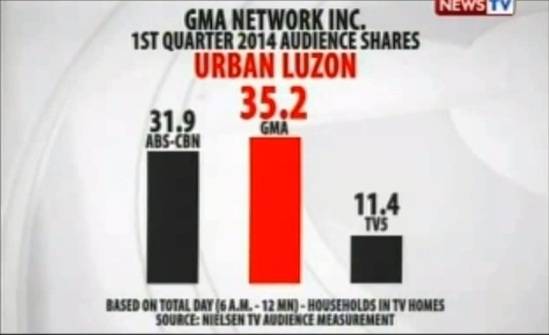 In Urban Luzon which has the 77 percent of TV households, GMA7 has 35.2 percent audience share. It is higher by 3.3 percent against the rival network ABS-CBN. In Metro Manila GMA7 has 36.3 percent ratings which is 7.1 percent higher compared to ABS CBN. TV5 remains on the third spot having 11.4 percent, and 12.3 percent for Urban Luzon, and Mega Manila respectively.

Watch the Complete Details below

According to the video, GMA7 continues to upgrade their service. They have plans of producing contents on both standard and HD TV format. The network also has plan to support digital TV platform and enhance GMA7 signals in rural areas.

Next post: Solenn Heussaff Singing In The Elevator Goes Viral