The better half of AlDub love team, actor, and endorser Alden Richards disguises as part-time bagger in a supermarket caught the attention of local shoppers. Their reactions are priceless!!!

Imagine yourself at the cashier supermarket and see Pambansang Bae Alden Richards do the packing of your grocery items? What will your reactions be, if you are just a few feet away from him?

Probably you will faint, star-struck, or you’ll smile from ear to ear. These mixed reactions happen to those who encountered Alden Richards at the supermarket. They also could not believe that the actor is just a few steps away from them.

Alden Richards disguises as Ricky Salumbre, and works as a bagger boy in one of the local supermarkets. He wears the usual bagger boy suit: apron, cap, white polo shirt. The only difference is he intentionally wears a pair of glasses to slightly hide his “Tisoy” identity.

However, the shoppers immediately recognize him even with just a glance. Who wouldn’t be? Especially, if you are used to hearing his voice on TV and you are a fan of Aldub love team. You probably can recognize his voice immediately. On the spot, you would think that you heard Alden’s voice. Fortunately, this time, you are correct.

The reactions of the shoppers are very understandable, hahaha. They can not believe that the actor is working there. I think one of the shoppers starts to run out of breath. Others are trying to confirm if he is Alden Richards. However, the actor reiterated that it is a mistake as he is Ricky Salumbre. 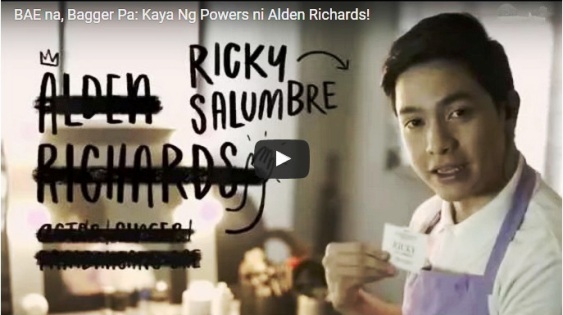 The video was made to promote YAZZ VISA Prepaid Card. It is the latest product offering of MetroBank. Yazz Card is a reloadable prepaid card. It allows the users to shop online, book flights online, send money to loved ones (money transfer) and withdraw cash from VISA automated teller machines (ATMs). Yazz Card is safer than carrying cash.