DingDong Dantes and Marian Rivera had their royal wedding at Immaculate Conception Cathedral in Cubao Quezon City on December 30, 2014. Watch the video to witness Marian Rivera as she walks down the aisle on her wedding day.

Marian Rivera wears the Michael Cinco-made off-shoulder wedding gown and she carries a bouquet of white roses. She was brought to the altar by her Spanish father Francisco Alonso and Filipina mother Amalia Rivera.

The DongYan’s royal wedding was officiated by eight bishops and seven priests. After the wedding, the couple had an 8-second kiss. 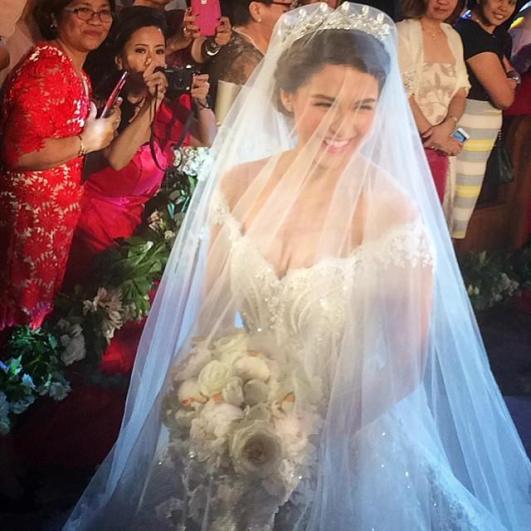 They have 25 secondary sponsors which include Richard I. Gomez, Lucy Marie T. Gomez, Ai-Ai Delas Alas, Bam Aquino, and KC Concepcion. Marian Rivera and Dingdong Dantes also have 18 groomsmen and 18 bridesmaids. The witness of honor is none other than President Benigno Aquino III.

The couple became engaged on August 2014 when Dingdong Dantes proposed to Marian Rivera during her show on GMA7. During his proposal, the actor said that there is nothing he could ask for, but to settle down and have a family. Furthermore, he added that one thing is clear to him – that is he wants to spend the rest of his life with Marian Rivera.

As of the present in 2022, Marian Rivera and Dingdong Dantes already have 2 children. Their first child was born on November 2015, while their second was born on April 2019.